VeggieTales is the Spaniard dub of said show, in the Spanish language. Dialogue and titles are translated from the Brazilian Portuguese dubs.

Are You My Neighbor? (re-dub)

Dave and the Giant Pickle/Lyle the Kindly Viking (VHS)

King George and the Ducky/Esther... The Girl Who Became Queen (DVD)

The Ballad of Little Joe

Duke and the Great Pie War

Minnesota Cuke and the Search for Samson's Hairbrush

Gideon: Tuba Warrior
Add a photo to this gallery 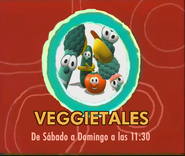 Footage of the 1st dub airing on Minimax

Canal Panda "Coming up next" boards

Footage of the 1st dub airing on Canal Panda
Add a photo to this gallery
Retrieved from "https://bigideafanon.fandom.com/wiki/VeggieTales_(European_Spanish_dub)?oldid=85968"
Community content is available under CC-BY-SA unless otherwise noted.