The sequel to The Ultimate VeggieTales Sing-Along. The last sing-along said it had over 30 songs, which had 34 songs. This DVD has a total of 36 songs.

I Love My Duck (from King George and the Ducky)

God's Got Plans (from Noah's Ark)

Just Adjust (from LarryBoy and the Community Chaos)

Dance of the Cucumber (from Rack, Shack, and Benny) 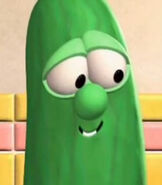 Cowbells and Custard (from Massproduction Madness)

Good For the Grabbing (from Veggies In Space: The Fennel Frontier)

Larry-Boy! (from LarryBoy and the Fib From Outer Space)

Think of Me (from Rack, Shack, and Benny)

Gated Community (from Sheerluck Holmes and the Golden Ruler)

Rock Monster (from The Pirates Who Don't Do Anything: A VeggieTales Movie)

The Silent Parrot (from The New Job)

His Cheeseburger (from Madame Blueberry)

Good Morning Mr. Mayor (from The Little House That Stood)

Mewantium (from Veggies In Space: The Fennel Frontier) 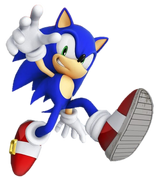 It Doesn't Matter (from Sonic the Hedgehog Comes To Town)

Grumpy Kids (from The Toy That Saved Christmas)

Schoolhouse Polka (from Sumo of the Opera) 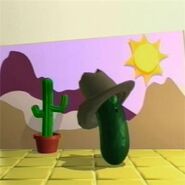 The Water Buffalo Song (from Where's God When I'm S-Scared?)

Lunch Savior (from LarryBoy and the Parody Gang)

The Great I Am (from Gideon: Tuba Warrior)

The Lord Has Given (from Josh and the Big Wall)

Love Is The Song (from Beauty and the Beet)

The Audition Song (from Twas the Night Before Easter)

Rock On, LarryBoy (from LarryBoy and the Bad Apple)

Christmas List (from Merry Larry and the True Light of Christmas) 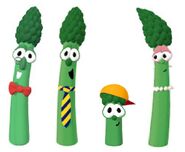 When We Treat God's Creatures (from Sheltered and Loved)

What We Have Learned (from God Wants Me To Forgive Them?)
Add a photo to this gallery
Retrieved from "https://bigideafanon.fandom.com/wiki/The_Ultimate_VeggieTales_Sing-Along_2?oldid=75225"
Community content is available under CC-BY-SA unless otherwise noted.