This is the RARE unreleased original 1998 Word VHS of Madame Blueberry with the rare Larry-Boy and the Rumor Weed trailer, the Word, Inc. and Everland Entertainment logos, and the original 1994-1997 logo and theme song that didn't make it into the final VHS release. They were originally going to release this episode in July 10, 1998, but for an odd reason, they changed the VHS cover design and replaced the theme song and logo with the 1998 versions in the final VHS release on July 21, 1998. 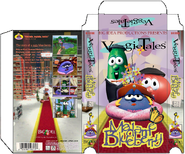 The sticker label.
Add a photo to this gallery

Retrieved from "https://bigideafanon.fandom.com/wiki/Madame_Blueberry_(1998_prototype_version)?oldid=78674"
Community content is available under CC-BY-SA unless otherwise noted.