Kirby is a pink puffball who loves to eat. He can eat his enemies and gain their powers. These powers are called Copy Abilities. For example, if he eats an enemy with a sword, he becomes a powerful swordsman. Kirby can also operate his own robobot. Kirby and Kirby: Planet Robobot characters appear in some League of Incredible Vegetables specials.

In his series Edit

Kirby lives in Planet Popstar, which is constantly being invaded by evil.

He is friends with King Dedede, Meta Knight and Waddle Dee.

Kirby can throw hearts to make up to 3 friends in the game, Kirby: Star Allies!. He has gone through many generations, but is still the puffball we all know and love. He has appeared in 20+ games.

In this Fanon Edit

Kirby made a debut in this Fanon in Ricochet and the Ruthless Robot Rampage helping Junior Asparagus to rescue Archibald. However, his games have been used as basis for others. 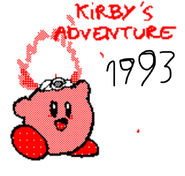 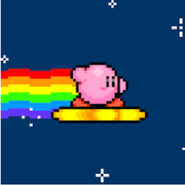 Add a photo to this gallery
Retrieved from "https://bigideafanon.fandom.com/wiki/Kirby?oldid=74095"
Community content is available under CC-BY-SA unless otherwise noted.