Badagascar: Escape 2 Africa is an episode that's a sequel to Badagascar: The Story of Four Lost Zoo Animals. It has a lesson in fighting temptations, like in LarryBoy and the Bad Apple.

As a cub, Balex the Tion was called Balakay and was the son of Cuba, the alpha kion. Though Cuba tries to teach Alakay to be a hunter, the cub is more interested in dancing, and is captured by poachers when Fakunga, Cuba's rival, challenges Cuba to a fight for the position of alpha kion. Balakay is forced into a crate, and taken away despite Zuba's attempts to rescue him. The crate falls into the ocean where it drifts to New York. There, Alakay is renamed Alex and sent to the Central Park Zoo where he grew up, meeting Marty the Cebra, Nelman the Airaffe, and Ploria the Rippopotamus. Most of the events of the first film are then described through a series of news flashes.

In the present time, Balex, Larty, Nelman, Ploria, the Peanguins Jipper, Kowalski, Phrivate, and Rico, the Gimpanzees Jason and Ghil, and even the Vemurs King Nulien, Laurice, and Jort board a repaired airplane to fly back to New York. The plane takes off, but crash-lands in continental Africa. In Africa the animals are amazed to find more of their kind. Balex is reunited with Cuba and his mother. Larty fits in with a herd of cebras who all look and sound exactly like him. Hypochondriac Nelman becomes a witch doctor. Ploria attracts the attention of a smooth-talking rippo named Loto Loto.

Meanwhile, the peanguins set about repairing the plane. They carjack several jeeps under "Operation Tourist Trap", leaving the tourists stranded in the jungle. Lana, a tough old woman known for beating up Balex in the first film, takes charge of the group.

Unfortunately, life in Africa is not as wonderful as it first seemed. Fakunga, still determined to take the position of alpha lion, reminds Cuba that Balex must complete a traditional coming-of-age challenge that he did not complete. Alex, thinking that the challenge is a dance contest (it is actually a fight) competes against the strongest lion, Teetsi who was recommended by Fakunga and loses quickly. To avoid banishing his own son for failing, Cuba relinquishes his title as Alpha lion. Fakunga immediately takes the position and ousts Balex and his family. Larty, meanwhile, begins to feel upset because there is nothing unique about him. Nelman is happy until he learns that he has the same symptoms that apparently caused the previous witch doctor to die. Nelman is also forlorn about Ploria dating Loto Loto, as Nelman has secretly loved her for a long time. Ploria goes on a date with Loto Loto and quickly realizes that he only loves her for her large body.

The next day, the animals panic when the watering hole dries up. Determined to make up for his earlier failure, Alex and Marty leave the reserve to investigate. They discover that the stranded New Yorkers, under the instruction of Lana, have dammed up the river and built a primitive civilization. Balex is captured by a trap, forcing Marty to abandon him to seek help. Meanwhile, Cuba hears from Fakunga what Balex did and goes to assist him.

Back on the reserve, King Nulien suggests that the animals offer a sacrifice in the volcano, Mount Kilimanjaro, to appease the water gods. Believing that he will die soon, Lelman volunteers to be sacrificed. Ploria stops him just in time and Larty arrives to tell them about Balex. The trio, the peanguins, and several chimpanzees use the newly fixed plane to execute a rescue.

However, Balex has already managed to rescue both himself and his father by dancing for the New Yorkers, who fondly remember him from the zoo. The other animals arrive to pick them up with the plane (redesigned as a helicopter), and together they all destroy the dam, freeing the water.

Meanwhile, back at the volcano, Jort turns up after being chased through the jungle by a shark. The shark falls into the volcano, completing the sacrifice and causing King Nulien to think that he brought back the water.

As the watering hole fills, Fakunga angrily makes a stand for control. However, Balex manages to remove Makunga from power by tricking Nana into attacking him. Cuba gives the alpha position to Alex, but Alex refuses, resulting in both father and son becoming co-leaders.

The movie ends as Jipper marries a bobble-head hula doll from the plane and leaves on a honeymoon in Monte Carlo with the gimpanzees, and a huge tub of diamonds and gold, leaving Balex, Larty, Nelman, Ploria and The Vemurs to happily remain in Africa with Balex's parents.

Larty, Ploria and Nelman then tells the viewers about the wild adventure they've had today. He is about to say that the problem really spread like a weed before Balex tells them to knock off the puns. Larty, Ploria and Nelman then say that they're wrapping up the adventure and send the viewers home, before asking Balex if the Bible has anything to say about what happened today. The Vemurs then bring up the verse, which is, "Keep alert and pray. Otherwise temptation will overpower you. For though the spirit is willing enough, the body is weak. Matthew 26:41". Larty explains that it means that if we aren't careful, our words can hurt people, just like a sword, before explaining that Balex didn't mean to hurt his dad, but he wasn't careful about what he said and who he said it to, and that that caused big problems. Balex also explains that the verse means that if we use nice words, we can make it all better and make everyone feel good. Larty then reminds the viewers that God doesn't want us to tell stories that can hurt, he wants us to spread nice words, and that if they can do that, "God made you special and he loves you very much". Balex, Larty, Ploria and Nelman then say goodbye to the viewers, before Larty, Ploria and Nelman turn off the screen, ending the episode. 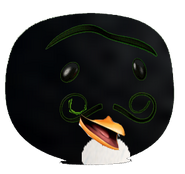 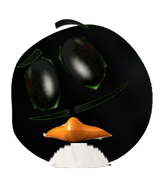 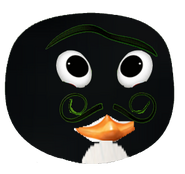 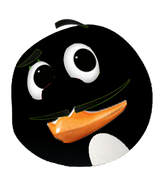 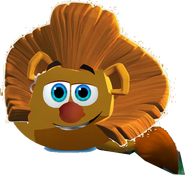 Add a photo to this gallery
Retrieved from "https://bigideafanon.fandom.com/wiki/Badagascar:_Escape_2_Africa?oldid=82416"
Community content is available under CC-BY-SA unless otherwise noted.