Start a Wiki
Another installment in the VeggieTales Sing-Alongs series. It was released the same time as The Water Buffalo Song and A Mess Down in Egypt. 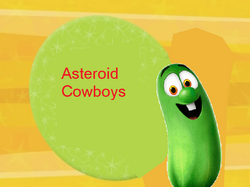 Retrieved from "https://bigideafanon.fandom.com/wiki/Asteroid_Cowboys?oldid=75006"
Community content is available under CC-BY-SA unless otherwise noted.